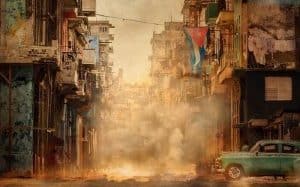 In the 1990s, the Cuban government set up a network of spies to send to the United States to gather information about Cuban organizations made up of emigrants fleeing Cuba and settling in Miami who were strongly campaigning against the Castro regime. As these organizations and the Cuban government move from mere manifestos to bloody actions, the very morality of those involved will be tested, along with their freedom. The film is inspired by real events and tells the story of 5 Cuban detainees arrested in the US for espionage and murder in the late 1990s.