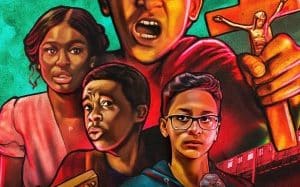 Vampires vs. the Bronx

Miguel is known as the Little Mayor in his neighborhood. He struggles to save Tony’s bodega, where he practically grew up. He’s the leader of a gang of his friends, Bobby and Luis, set out to defend the neighborhood and its residents. The disappearances of several children and the lack of involvement of the police make the boys investigate, accidentally finding on a stick the plans of a company to build a building to house the coffins of several vampires. Inspired by Blade, the boys will start the fight against the transformation of their neighborhood, a fight with unequal weapons against beings who avoided death by sucking the blood of others.