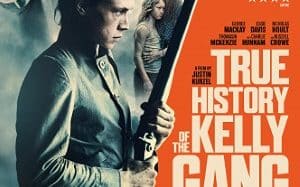 True History of the Kelly Gang

Based on Peter Carey’s novel, True History of the Kelly Gang (2019) follows the story of Australian Ned Kelly and his gang while fleeing the authorities in the 1870s. The wicked Ned Kelly lived only 25 years, but it was enough to write his story in Australian legend. Kelly grows up in a family of Irish immigrants, already rebellious, who regularly stumble upon the justice that has been imposed by the local police. Over time, he comes under the influence of Harry Power, a bandit disrespectful to the colonial authority in the wild territory where he operates. Every conflict with the law pushes Kelly closer to a life dedicated to crime. Influenced by Harry Power and fueled by the unjust arrest of his mother, Ned Kelly recruits a savage gang of warriors to plot one of the most daring attacks of the rebellion the country has ever seen.