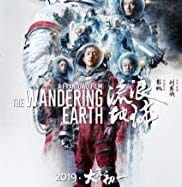 The Wandering Earth tells the story of an epic project to relocate the entire Earth and the 3.5 billion inhabitants to another solar system sometime in the near future, precisely because the Sun dies and is about to swallow the Earth. The project involves the realization of 10,000 giant propellers that would move the Earth from orbit. Meanwhile, the population is moved under the Earth, because the terrestrial surface has become too cold for human life.