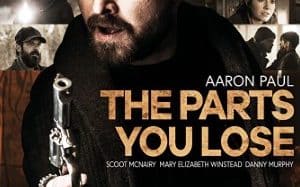 The Parts You Lose

A young boy from a small town in North Dakota befriends a dangerous fugitive. Wesley, a young deaf man, is frequently bullied at school, and his home life, a sanctuary, consists of his loving mother and younger sister. One day, while going to school, Wesley finds a strange helpless man bleeding near the road. He brings the man to an abandoned barn, not far from his house. The man slowly recovers, helped by Wesley, who sneaks food and medicine to his parents without his knowledge. He and Wesley develop a paternal bond, while the man teaches Wesley how to heal and stand up against battles, both at school and at home. After a police officer visits the house, Wesley sees the darker side of the man he helped and realizes that the violence that may follow will soon be encountered. Wesley has to choose between his loyalty to a dangerous stranger and to understand what’s good and what’s wrong in this world.