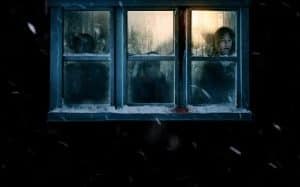 Richard, who is divorced from his wife, involuntarily pushes her to suicide when he tells her that he wants to end the divorce and marry his new girlfriend, Grace. As a result of that marriage, two children remained, a boy and a girl, to whom Grace wants to get closer. Thus comes the idea of spending Christmas at the family cottage isolated in the mountains. Professional problems prevent Richard from staying with family members, so he returns to the city. Left with the children, Grace tries to get to know them better, but just as things started to go on, a series of strange events begin to take place, while heavy snow isolates the three of them and prevents them from leaving the cottage.