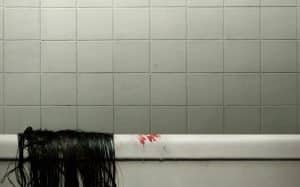 In 2004, Governor Fiona Landers left a house in Tokyo, troubled by the events she experienced inside. Fiona announces to her colleague, Yoko, that she is returning to the US before encountering Kayako Saeki’s ghost. Fiona was coming to her home on Reyburn Drive, 44, in a small town in Pennsylvania, meeting her husband Sam and daughter Melinda. Kayako’s curse is on Fiona and causes her to kill Sam and drown Melinda before she kills herself. Detectives Goodman and Wilson are investigating the crimes. Uneasy about the house, Goodman doesn’t come in, unlike Wilson. After leaving the house, Wilson begins to lose his mind and becomes hysterical when he sees Fiona’s ghost, trying to kill himself shortly, without success. Wilson will be disfigured in an asylum, and Goodman won’t investigate the case. Everything changes when Goodman receives a new partner who takes him on the same path as Wilson.