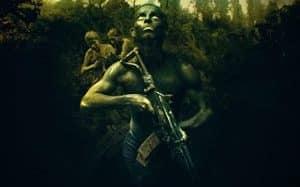 A saga of survival, the film follows a group of rebel soldiers and young people in the isolated mountains of Latin America. Named after Rambo, Smurf, Bigfoot, Wolf, and Boom Boom, they guard an American hostage, training in the military during the day and bathing in carnal pleasures at night, an unconventional family tied together by an unknown force called the Organization. After an ambush leads the platoon into the jungle, both the mission and the intrinsic connections within the group begin to disintegrate.