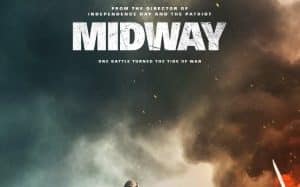 Midway (2019) focuses on the Battle of Midway, the most important naval battle in the Pacific War, part of World War II. The film, based on real-life events, tells the story of leaders and soldiers who used their instincts, strength and bravery to overcome all obstacles. Following the Pearl Harbor attack that left the American Fleet devastated, the Japanese Imperial Navy is preparing a new attack that should permanently eliminate the remaining naval air forces of its adversary. The Pacific Campaign will play in a small isolated North Pacific atoll: Midway. Admiral Nimitz, at the head of the American Fleet, sees this battle as a final chance to overthrow Japanese superiority. A counter-timer race then begins for Edwin Layton, who must break the secret codes of the Japanese Fleet and, thanks to the information, allow American pilots to oppose the largest offensive ever conducted during this conflict.