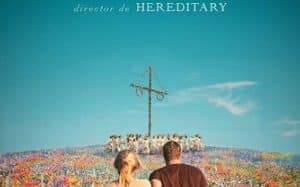 While Dani suffers from the recent loss of her parents and sister, it is hard for Christian to cope with her anxiety and emotional difficulties. When the two are invited by their friend, Pelle, to his hometown to attend a traditional festival, Dani sees the trip as an opportunity to repair and strengthen his relationship with Christian. When they reach the remote village, they are warmly welcomed by friendly locals, and the group considers the place a rustic paradise. People seem to be delighted to have guests, giving them a communal home to live in during their stay. The group of friends witnesses many rituals and practices performed during the summer solstice, but Dani, affected by the recent death of her parents, expresses concern about the traditions of the community. Soon, what begins as an idyllic escape quickly turns into an increasingly violent and bizarre race, controlled by a pagan cult.