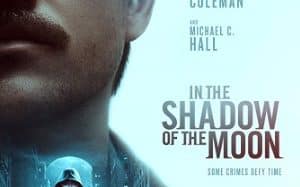 In the Shadow of the Moon

A Philadelphia police officer begins to lose his sense of reality as he struggles with the obsession of capturing a mysterious serial killer whose crimes defy logic. In 1988, patrol officer Thomas Lockhart longs to be promoted and begins to track down a serial killer who mysteriously reappears every nine years. The victims without obvious connection, die suddenly and horrific after being attacked and injected with a mysterious substance. As the killer’s crimes begin to defy all scientific explanations, Locke’s obsession with finding the truth threatens to ruin his career, family, and possibly health. After 9 years, the murderer returns with a new series of scary crimes. When Locke follows the suspect in the new crimes, he discovers that he is exactly the same woman he accidentally killed nine years ago. This time, she disappears, leaving him unanswered and with the warning that he must stop following her. However, a recurring nightmare brings Locke to the brink of madness, calling into question his entire reality.