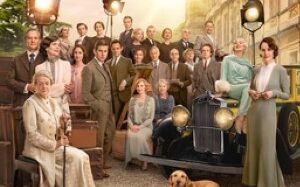 Violet Crawley, the widowed Countess of Grantham, reveals that years ago, before her children were born, she had an affair with a man and now finds herself in possession of a villa in the south of France. A film production company requests to use Downton as a location for a silent film called “The Gambler”. Initially denied, they eventually gain access because the funds obtained in this way would help repair the building. While many of the servants there are eager to start filming, the arrival of the lead actress soon becomes unsettling.