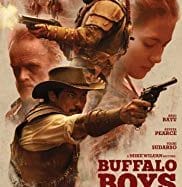 In the 19th century in Java, a brutal massacre and the murder of Sultan Hamza by Captain Van Trach and his Danish soldiers force Arana, Jamar and Suwo – the brother of the sultan and his children – to flee the country, reaching the Wild West. After a while here, Aran tells the boys that the time has come to come home and avenge their father’s death. Arriving back on Indonesian land, the hunt of their father’s killer begins. Their presence threatens the villagers, and the search for the killer soon turns into a struggle for freedom.