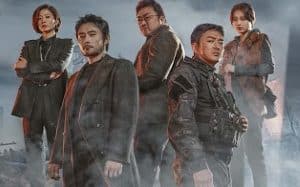 The long-dormant Paektu Volcano is resuming its activity and threatening to destroy much of the Korean Peninsula. Kang Bo-Rae, a professor at Priceton University in Korea who predicted the event, is being brought in to help in the crisis. His solution is to detonate an atomic bomb near the volcano to release the pressure from the magma. The problem is that the only nuclear bombs are in North Korea, and they will be decommissioned by the Americans. Two teams are sent to complete the mission, one of them by engineering specialists. Only the team of specialists survives the road and must carry out the plan. The fact that the need to get a North Korean, a spy for the south, who arranged to hand over the warheads of former associates, but also the Americans, who want to seize the warheads to destroy them, will come into play the plan of the team of fighters completely unprepared for the situation.