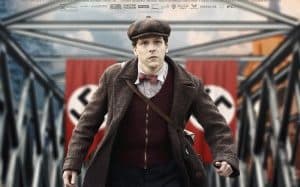 Before he was the famous mime Marcel Marceau, he was Marcel Mangel, an aspiring Jewish actor who joined the French resistance to save the lives of thousands of orphaned children from Nazi hands. In the center is a group of unusual heroes who are in danger of rising above hatred and oppression during the Second World War. As a young man growing up in Nazi-occupied Europe, Marcel has no intention of engaging in war. He imitates Charlie Chaplin in burlesque clubs, paints decorations for his plays, and opposes his stubborn father. His life is overturned when he is recruited by the French resistance, putting his acting talents to great test in teaching orphaned Jewish children how to survive in the horrific reality of the Holocaust. Inspired by a true story, the film follows the revolutionary story of an altruistic act that will change countless lives.