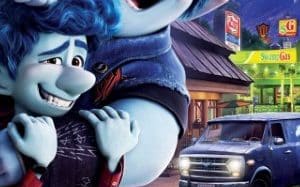 The story is in the foreground of Ian, an elf whose father died before he was born. Uncertain and introverted, Ian longs to be confident and strong and lives with the impression that he would have both qualities if he had grown up with his father. Ian has an older, wild and rather chaotic brother named Barley, who is a constant source of problems for Ian. Barley wants to teach his younger brother something about life, but Ian isn’t sure he even knows what he’s talking about. Ian wakes up, at the age of 16, to want – more than ever – to be better and bolder, as he imagined his father to be. And when the mother gives the boys a gift left behind by the deceased father, Barley immediately comes into play, especially as he is a big fan of the history of their world and the idea of ​​magic. But the spell does not work as it should and the boys destroy the stone until the trial is complete. They can only remember their father’s feet, which are very alive and moving. And they only have 24 hours to find another gemstone and bring it back to life, otherwise they lose the only chance to know it … With the help of Barley’s multi-purpose van, called Guinevere, the brothers set off on a memorable adventure that is and a test of the connection between them.