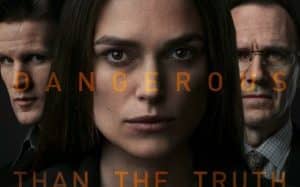 A story of 21st century morality, Official Secrets tells the true story of British medical sister Katharine Gun who, in the period immediately following the 2003 invasion of Iraq, unveiled a top NSA secret note exposing US-UK joint illegal espionage, operation against members UN Security Council. The report proposed the blackmail of smaller and undesirable member states to vote for the war. Journalist Martin Bright published the paper in The Observer newspaper in London and the story held headlines around the world. The members of the Security Council were outraged and any chance of a UN settlement in the war collapsed. Within days, Bush said he no longer needed UN support and invaded Iraq anyway. As Iraq descended into chaos, Katharine was arrested and charged with violating the Official Secrets Act. Martin also faced potential charges. Their legal struggles have exposed the highest levels of government in both London and Washington.