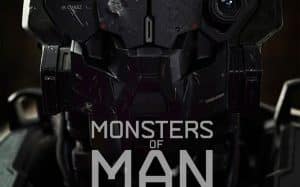 Many companies develop robots that become soldiers, with artificial intelligence that will allow them a certain degree of discernment of their own on the battlefield. The CIA is testing the product of such a company, sending a team of 4 robots to the jungle to destroy some drug dealers. However, in the village that was the target of the robots, there was a former SEAL soldier who was hiding from the past and 6 more American doctors will go on a humanitarian mission. Everything goes crazy when the robot attack strikes, and the 7 Americans and a few surviving locals are forced to flee to save their lives. Realizing the mess they got into, trapping American citizens in the middle, everyone involved wants to erase their footprints, using robots to do so. On top of that, one of the robots, damaged during the launch, escapes the control of the CIA, the artificial intelligence helping him to evolve beyond the soldier stage that obeys the orders.