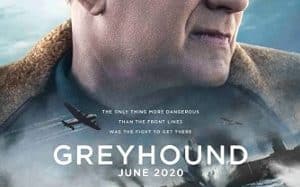 Based on the novel written by CS Forester and entitled “The Good Shepherd”, the film follows a US Navy commander on his first war mission, in the middle of World War II during the Battle of the Atlantic, as he leads a military escort naval, being pursued by German submarines. During World War II, an international convoy of 37 Allied ships, led by Commander Ernest Krause, crossed the North Atlantic while German submarines lurked. As he confronts the enemy, Krause must fight his personal demons to be an effective leader of the Allied side.