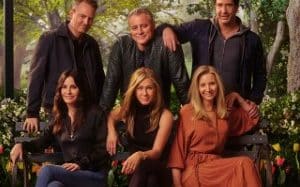 Friends is one of the most popular television series in history. The ten seasons of Friends consisting of 235 episodes generated huge audiences and even though the last episode was broadcast in 2004, this sitcom continues to be in the top of preferences even today. Taken over and broadcast on television around the world, Friends has a huge fan base and the continuation of this legendary sitcom has often been questioned, but this has not happened. But here that after 17 years the famous friends reunite in a show in which there is no predetermined scenario and everything goes in a very natural way.