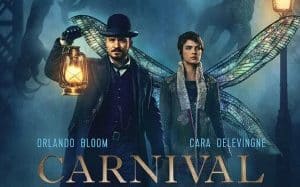 Carnival Row is a fantasy drama whose action takes place in the Victorian era populated by mythological beings. Orlando Bloom plays Rycroft Philostrate, a human detective while Cara Delevingne is a refugee fairy named Vignette Stonemoss. Together they will live dangerously in an increasingly intolerant society, in which fantasy beings are forbidden to live, love or fly in freedom. Vignette knows a secret that endangers Rycroft’s world as he tries to solve one of the most important cases of his career: a series of horrific murders that threaten the peace of Row.