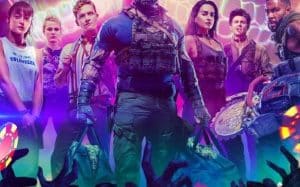 Army of the Dead

A military convoy carrying packages from Area 51 collides with a car on the highway and releases a human weapon that has been genetically modified using extraterrestrial DNA. This genetically enhanced zombie kills several soldiers and infects two others. These zombies then head to Las Vegas and infect most of the city’s population. The US military is trying to intervene and isolate this threat, but is failing in their mission, so the government has no choice but to intervene with all available forces to establish quarantine throughout the city. Meanwhile, a casino owner and his partner are co-opting former mercenary Scott Ward to recover $ 200 million from the safe before the military destroys the city with a nuclear bomb.