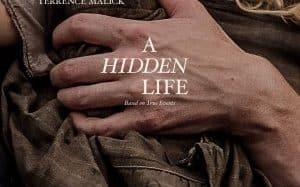 Based on real events, A Hidden Life (2019) is the story of a forgotten hero, Bl. Franz Jägerstätter, a man who refused to fight for the Nazis in World War II. A hardworking farmer, pious Christian and a devoted father and father, Franz Jägerstätter is a respected member of his alpine village, St. Radegund. Franz’s edenic existence begins to fade, and then, as war breaks out on the European continent, Nazi ideology spreads, and both the church and the mayor begin to preach anti-Semitic dogma. Franz undergoes military training, but refuses to swear allegiance to Hitler. When called upon to enroll, he refuses this, a decision that will test the limits of his beliefs. When the Austrian farmer faces the threat of being executed for treason, only his unwavering faith and love for his wife and children keep his spirit alive.